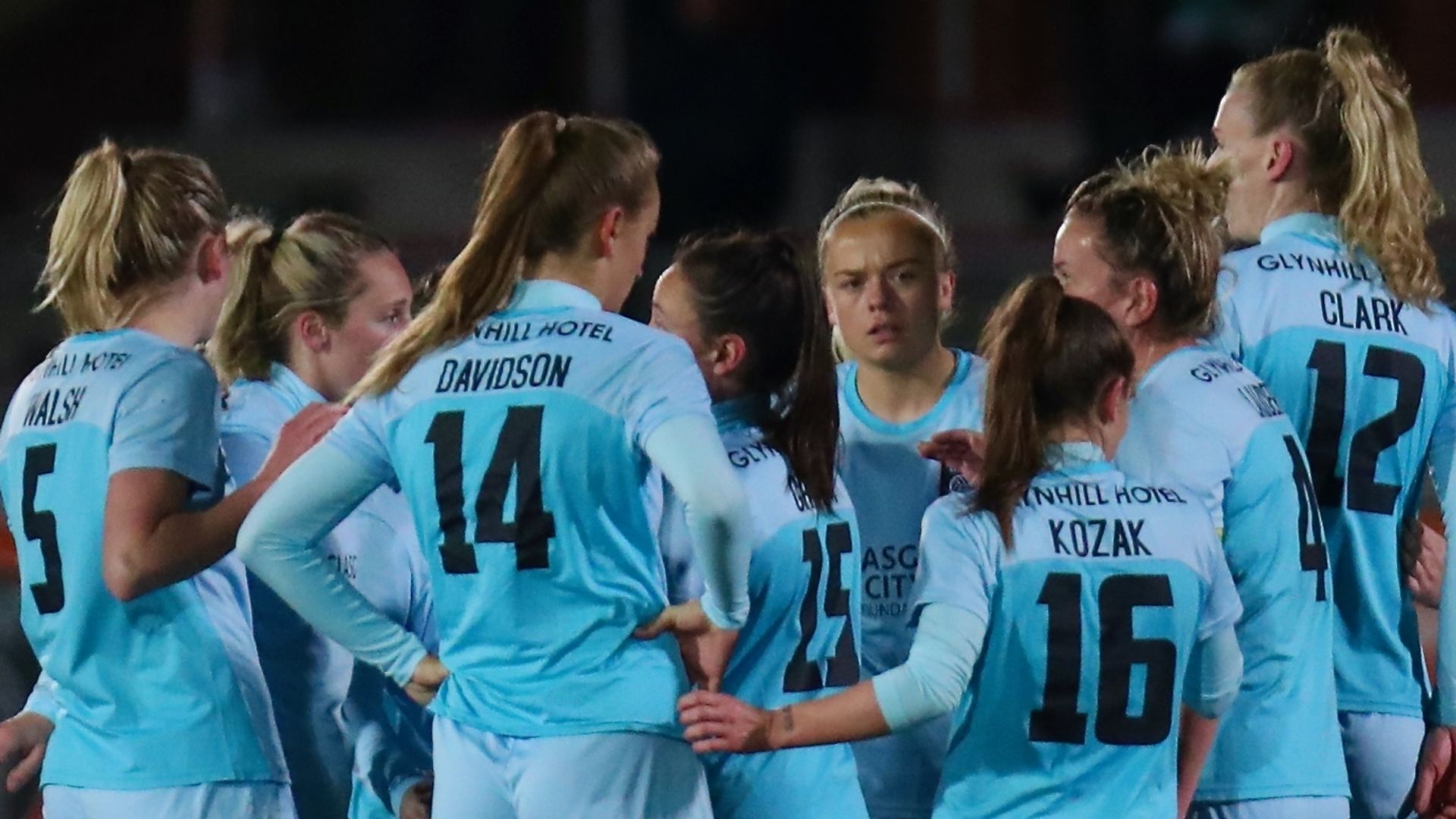 Glasgow City remain top of the Scottish Women’s Premier League after coming from behind to beat Hibernian 2-1.

The hosts started well and almost opened the scoring when Hayley Lauder saw her strike from distance fly past Bene Haaland in the Hibs goal, only to come off the bar.

However, that lead did not last long as Lauder crossed for Scotland international Jenna Clark who headed home City’s equaliser after the restart.

The turnaround was complete with less than 20 minutes to play as Mairhead Fulton – who scored the last time the teams met – crossed into the area where the ball came off Liana Hinds and into her own net to give City all three points.

Glasgow City remain two points clear at the top of the table from Rangers who are next up for Hibernian in the Sky Sports Cup final on Sunday.

Rangers head into that Sky Sports Cup final after easing to all three points against Glasgow Women.

Despite a big game ahead, Rangers put out a strong starting XI and were 8-0 up at the break.

Nicola Docherty got the first goal after just three minutes, opening the floodgates at Alliance Park.

Docherty got her second of the game after the break to make it 9-0 before Lisa Martinez rounded off the scoring for the Gers.

The result leaves Glasgow Women still without a point this season, while at the other end, defending champions Rangers remain in the title hunt in second place behind Glasgow City.

Celtic remain three points off top spot after an emphatic victory over Dundee United at the Excelsior Stadium.

Any potential of a shock was quickly dismissed as Celtic went 1-0 up after three minutes through SWPL top goalscorer Clarissa Larisey.

The home side were then 3-0 up after 24 minutes through goals from Shen Mengyu and Amy Gallacher.

Mengyu completed her hat-trick before the end, along with second-half goals from Tiree Burchill and Maria McAney.

While Celtic remain a point behind Rangers and two further behind Glasgow City, United are ninth.

Managerless Aberdeen moved themselves to within one point of guaranteed SWPL football next season with a draw at home to Spartans.

Francesca Ogilvie gave the hosts the lead with 40 minutes on the clock as the Dons looked to get back-to-back victories for the first time this season.

However, Louise Mason had other ideas as her long-range strike brought the two sides level only three minutes later.

Aberdeen are now just a point behind Hamilton Academical in 10th and two points behind Dundee United in ninth, while Spartans move three points clear of United and two points from a place in the top six.

Hearts ensured they would remain fourth in the SWPL heading into the new year with a comfortable victory over Hamilton Academical, souring Gary Doctor’s 200th game in charge of the visitors.

Georgia Timms opened the scoring with 13 minutes on the clock, beating Chloe Nicolson to the ball and finishing nicely after an Erin Rennie cross.

The final 22 minutes of the game saw Hearts get a double from Katie Rood, while Jennifer Smith scored in between those goals to seal an emphatic win.

Hearts move onto 22 points and cannot be caught by anyone below them until at least 2023, however, Hamilton are four games without a point and will have one eye on Aberdeen who are now just a point behind.

The Crypto Industry Struggles for a Way Forward After FTX Collapse

She Found Serenity Again in Brooklyn, and a Place to Build a New Life