Sadly, Italy have been the perennial whipping boys of the Six Nations since their introduction in 2000. Progress has been minimal, and their position has often been questioned, but last year Italy produced some results that provide optimism ahead of this year’s tournament. Can they sustain last year’s progress?

2022 featured two seismic victories for the Azzurri; their thrilling last-gasp win over Wales at the Millenium Stadium, their first away Six Nations success since 2015, and their historic victory over Australia in the autumn. The successes were much needed after Georgia’s impressive year (including a win over the Italians) had intensified the debate around their potential involvement in the Six Nations. Italy’s victories featured moments of flair, with their lightning-quick fullback Ange Capuozzo a central figure in both wins. In Capuozzo, Italy have a genuine superstar, an elusive runner with a low centre of gravity and a devastating step; he was deservedly named World Rugby Men’s 15s Breakthrough Player of the Year for 2022. Capuozzo brings a potency to Italy’s back line they have never had before; the key for the Azzurri is providing him with enough ball to weave his magic.

It’s not just Capuozzo, though; there was a welcome coherency to Italy’s backline play last year. Capuozzo’s first try against Australia came from a superb team move, featuring some deft hands and lovely running lines executed at a high pace. There was a refreshing willingness to play from the Italians, and their attacking game has developed impressively over the last year. Kieran Crowley has picked a youthful squad, suggesting a desire to play a high-tempo game, with Tommy Allen the only player with over 50 caps. They will miss the pace and power of winger Monty Ioane, but there is a welcome return for Gloucester’s Jake Polledri after almost two years out with injury. Polledri’s return needs to be managed carefully, as he has the potential to bring some pace and dynamism to the pack when fully fit.

Italy’s optimism is further buoyed by the performance of Benetton Treviso this year, who are sitting an impressive sixth in the United Rugby Championship, losing just one home game all season. Treviso have also had an impressive Challenge Cup campaign, comfortably qualifying for the last sixteen. However, Zebre have had a woeful season so far, rooted to the bottom of the URC and rarely looking like getting close to a victory. The lack of competitiveness from Italy’s “2nd” club has been an overriding theme for some time now, with Zebre managing just one win last season. Zebre provides eight of Crowley’s 34-man squad, and Crowley will hope the continual losses haven’t been too detrimental to the Zebre contingents’ confidence. No disrespect to Zebre, who compete wholeheartedly, but would Italian rugby be better served by placing all of its eggs in one basket?

Italy’s opening fixture is at home to the tournament holders, France, a tough ask for anyone. Things don’t get any easier with a trip to Twickenham a week later before hosting a formidable Ireland side in round three. Italy will be targeting their home fixture against Wales in round four, buoyed by their dramatic win last year. Welsh rugby is in turmoil at the moment, despite the return of Warren Gatland, and Italy will hope to take advantage of the disarray. They round the tournament off with a trip to Murrayfield, another match they will quietly fancy. So what would represent a good tournament for Italy?

Realistically, a win would represent a good tournament for Italy, despite their progress last year. It’s important that they come out of their first three games relatively unscarred; they don’t want to be devoid of confidence ahead of their crucial fixture against Wales. It would be nice to see an improvement in Italy’s defence, which was very leaky last year, and will continue to hamper their progression unless addressed. Their wins against Wales and Australia revolved around good discipline and competing hard at the breakdown. Skipper Michele Lamaro can be a nuisance at the breakdown, and he will be a key man for the Italians. Italy are starting to play some entertaining rugby, but substance needs to come before style. If they can marry their new found flair with their more traditional strengths, then Italy could ruffle some feathers. 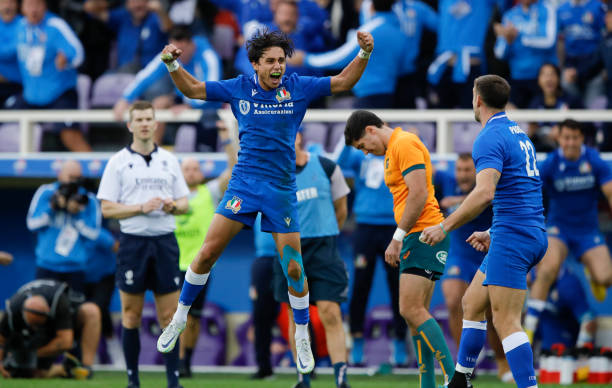 92% of millennial homebuyers say inflation has impacted their plans

Avalanche after all transparent second-round hurdle, earn date with Oilers

Decentralized Casinos Are The Future Of Online Gambling

Save on a Tablet Your Employees Can Use Almost Anywhere

Antony Blinken went to defuse Israel-Palestine. Outdated US policy stood in the way.