Pep Guardiola insists he is responsible for Manchester City’s form and does not think his players have a mentality issue as they look to close Arsenal’s eight-point lead at the top of the Premier League.

City take on Tottenham at the Etihad on Thursday night, live on Sky Sports, looking to apply pressure on the Gunners again after losing ground in the race last weekend.

Arsenal’s 2-0 win over Spurs in the north London derby after City’s 2-1 loss at rivals Manchester United created some distance between the two teams and was the second defeat in a row for Guardiola’s side following their Carabao Cup exit to Southampton.

That dip in form has prompted talk of a psychological problem within the City squad, but Guardiola is not convinced that is the case.

“People wonder why City are not top of the league, but it happens,” the City boss said. “There is a team who has been fantastic so far and this is not a problem, it is accepted that the other team is better, but what do we have to do?

“The only way, is not waiting what they are going to do, try to win our games and play even better. I do not think it is about mentality because you see the game against United and the previous one against Chelsea (a 1-0 win). We did really, really well.

“We always had belief. When we lose a game, the tendency is always to say we don’t run, the tendency is the mentality, or there is no fight. But maybe there is a tactical reason where I did not help them. I have to find something to help the team to get better because I am the man responsible.

“People do not wait, they expect me to find a way to win games. Otherwise, it’s ‘Pep Out’, this is how our jobs work and I want ‘Pep In’ and to stay here.”

City are attempting to become only the fifth English club to win three consecutive league titles, while Arsenal are aiming for their first since 2004.

The Gunners have lost just once in the league after 18 matches, while City’s defeat at Old Trafford was already their third, but Guardiola insists there is still plenty of time for his players to close the gap. 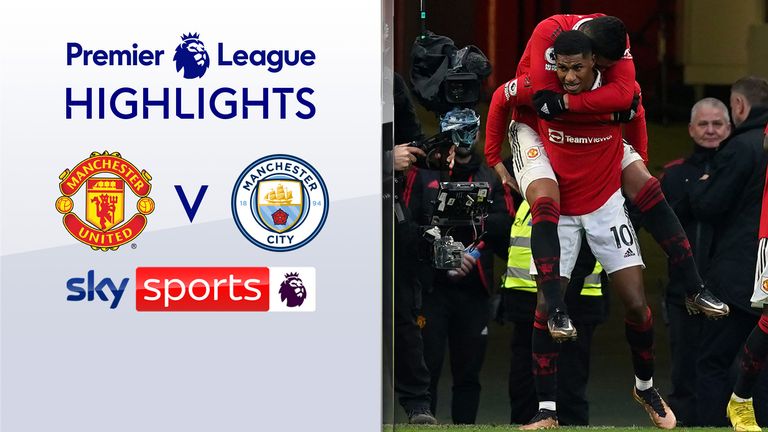 FREE TO WATCH: Highlights of Manchester City’s loss to Manchester United in the Premier League

“I want to fight for all the titles and the Premier League. There are 60 points left and many tough games left for everyone. We are going to fight, but we can lose,” he said.

“I’m never relaxed even when I’m eight points in front. Before a game, during the game, never.

“Pressure is the next game. We can’t think about expectations except winning the next game. If Arsenal are eight points ahead it is because they are solid, good in all departments and deserve to be there.

Pep: Conte creates problems for everyone

City’s next opponents Tottenham head to Manchester on Thursday with their bid for Champions League qualification faltering after a run of three victories in nine Premier League games.

Spurs have played fewer matches than fourth-placed Manchester United but can take confidence from their recent record against City. They did the double over the champions last season and have won four of the past five league meetings, while head coach Antonio Conte is one of only a few managers to have a winning record against Guardiola (W3 L2).

“Antonio creates problems for everyone, not just myself,” Guardiola said. “He beat me a lot. He has an incredible philosophy and has had success wherever he has been with Siena, Juventus, Chelsea, Inter, and the national team.

On the challenge Tottenham will pose, he added: “Spurs have always been a tough opponent for the quality, for all the years. This year is not an exception.”

City midfielder Kevin De Bruyne is available for the fixture at the Etihad after missing a training session for personal reasons this week.

The Belgium playmaker was conspicuous by his absence when a TV company filmed some of City’s preparations for the game but Guardiola confirmed there was no serious issue.

“He had a personal issue and could not train but today he is back,” the City boss said, before adding centre-backs John Stones and Ruben Dias could also return after recent injury layoffs.

“They are back. They have both trained really well in the last two sessions. They are in contention.”