Super-middleweight Zak Chelli will return to action on February 11 at the OVO Arena in London when he takes on the ‘Magician’ Anthony Sims Jr.

English super-middleweight champion Chelli celebrated a unanimous points victory over Germaine Brown on his last outing at Wembley in June. 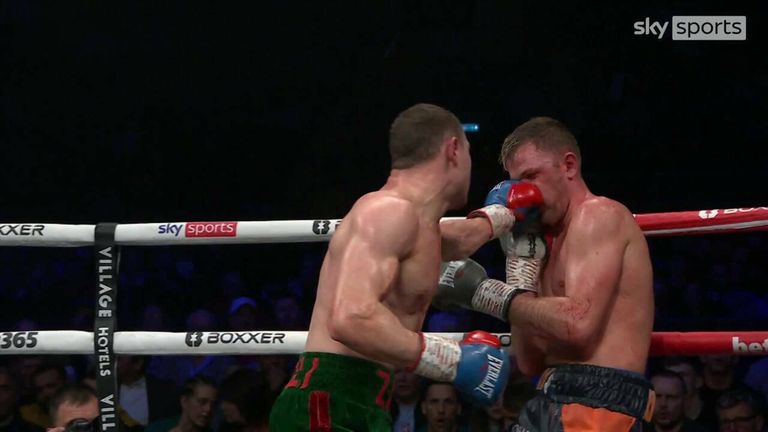 Chelli dropped Jack Kilgannon in the sixth round with this huge statement knockout!

He was set to defend his title last November at Alexandra Palace before his opponent Lerrone Richards was forced to withdraw after they weighed in.

Now Londoner Chelli, who has high aspirations of making big strides in the 168lb division this year, faces a major step up against his American opponent.

Sims Jr stands at 6ft 1in and in 2021 won the WBA Inter-Continental super-middleweight title – he is a cousin of the legendary Floyd Mayweather Jr.

The 27-year-old from Indiana is renowned for his destructive power with an impressive 20 KOs on his resume.

Chelli insists this is a fight that fans in London will not want to miss.

He said: “After the disappointment of not fighting last November, it’s great to be back at the OVO Arena in Wembley.

“This will be a really good fight for me. I’m training hard and I want to make a big impact on the division this year.

“I’m looking forward to taking on an experienced man from overseas in Sims Jr and stealing the show!”

Hassan Azim is back too – and is on a mission to underline his incredible talent this year.

The elder brother of Adam, Hassan Azim is undefeated and put on a brilliant performance last November when he outclassed Nestor Amukoto at Alexandra Palace with a comfortable points victory to cap a highly successful 2022.

The popular welterweight prospect won all four of his fights last year and he will be keen to create his own headlines when he launches his campaign in London – live in the UK & Republic of Ireland on Sky Sports. An opponent will be named in due course.

Joining the bill is the ‘Wanderer’ Jordan Reynolds. The Luton-based super-welterweight was successful on his most recent visit to Wembley’s iconic arena when he outclassed Jose Manuel Lopez Clavero in a majority points victory last October.

Iranian featherweight prospect Razor Ali will be keen to showcase his sharp skills in the capital too. Ali – full name Alireza Ghadiri – is unbeaten in six previous fights and will be keen to pick up his first stoppage in what will be his seventh professional fight.

Adam ‘The Assassin’ Azim headlines the bill against undefeated Santos Reyes. With six consecutive stoppage victories – including November’s stunning two-round demolition of the highly-regarded Rylan Charlton – BBC Young Fighter of the Year, Azim has now established himself as one of the world’s leading lightweight prospects and looks to be a world champion in waiting after his breakthrough year in 2022.

Best known to British fight fans for her WBA Intercontinental title battle with Terri Harper last year, Abellaneda – who has successfully defended her Argentina national title four times since winning it in December 2020 – is making her second visit to the UK next month.

The English middleweight championship will be on the line when newly-crowned champion Tyler Denny makes his first defence against undefeated Cornwall man Brad Pauls.

Viddal Riley marked himself out as a rising threat in the stacked cruiserweight division in 2022. On February 11, he turns his attention to Anees Taj.

Could Black Flight Change a Model of Integration?

‘We’re not going to back down’: Flames begin playoff push with epic effort at MSG

How TikTok’s algorithm boosted videos of the Chinese balloon shootdown