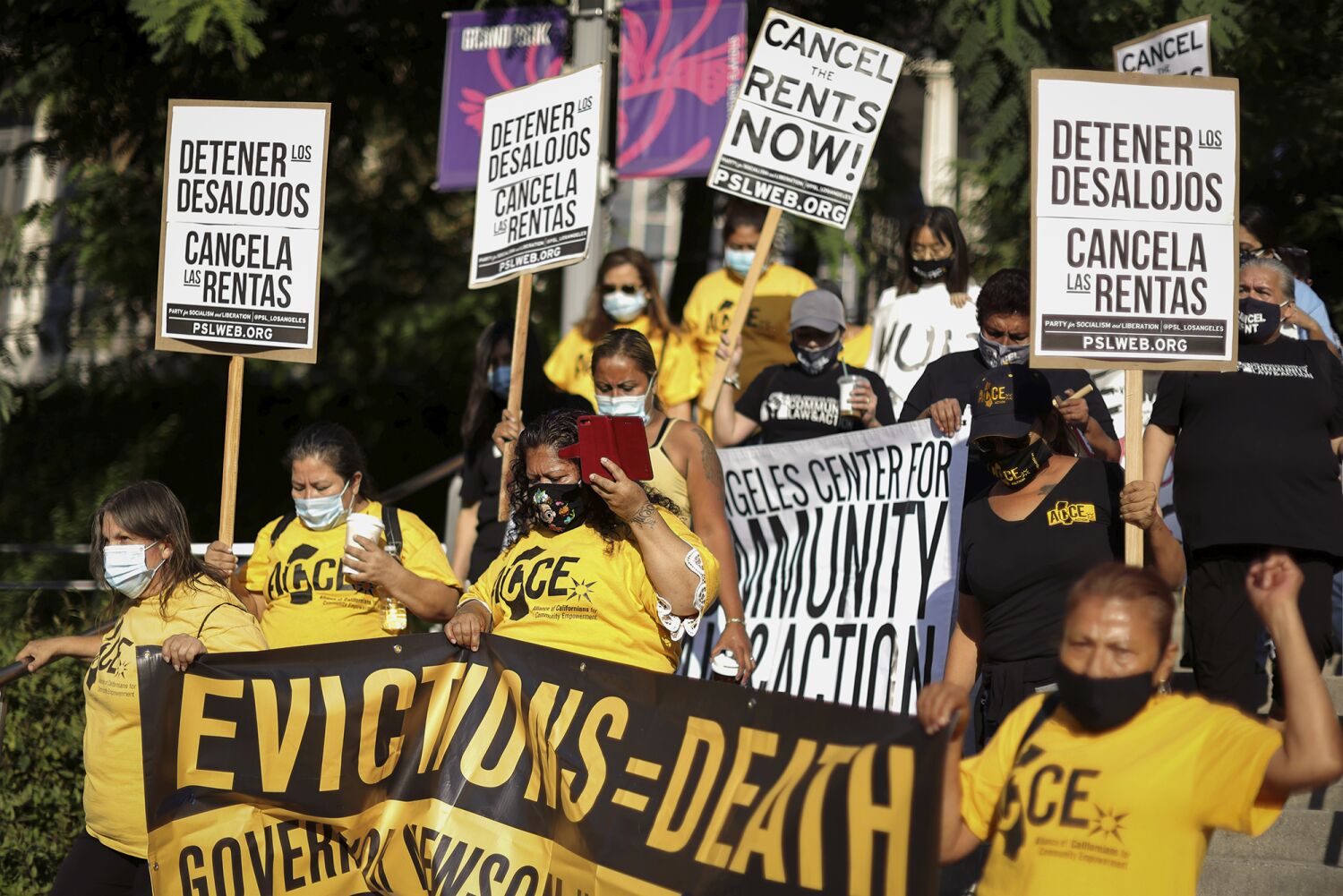 Los Angeles County will move forward with a plan to lift its pandemic-era eviction moratorium and other renter protections by the end of the year, according to a 3-2 vote Tuesday by the Board of Supervisors.

Officials will “perform robust outreach” to make sure that tenants and landlords in the county’s 88 cities are prepared for the end of the renter protections, said Supervisor Kathryn Barger, who introduced the motion.

“Given the resources we put into play, the financial resources to help both tenants and landlords to collect back rent, it’s time for us to begin moving forward,” she said during Tuesday’s meeting.

The county’s moratorium, which took effect in March 2020, has protected tenants against no-fault evictions and evictions for nuisance, unauthorized occupants or pets, and not providing entry to landlords. It also provided protections against harassment and retaliation, implemented a rent-increase freeze for mobile homes and rent-stabilized units, and extended certain eviction protections for nonpayment of rent due to financial hardship related to COVID-19.

In January, supervisors voted to extend the moratorium through Dec. 31.

Supervisor Sheila Kuehl, who voted against Tuesday’s motion cementing the expiration date, called the end of the renter protections “premature” and said she intends to introduce another motion that would prevent no-fault evictions and limit how much landlords can raise rent.

The eviction moratorium has played a major part in slowing the growth of L.A. County’s homeless population, Kuehl said. Last week, the results of the most recent count by the Los Angeles Homeless Services Authority showed a 4.1% increase from 2020 to 2022, compared with a 25% jump from 2018 to 2020.

Kuehl warned that it would be “extremely dangerous” to lift all of the renter protections enacted during the pandemic.

“I think the headline will be: ‘This board must love homeless people.’ They are going to make so many more of them,” Kuehl said during the meeting.

Supervisor Hilda Solis, who also voted against the motion, said 58% of the renter households in her district are cost-burdened.

“I really want to go and protect those people that I know have been vulnerable through much of the pandemic and continue to also be faltering right now because they don’t have a steady job,” she said.

Chair Holly Mitchell contended that the board had already voted in January to lift the moratorium by year’s end and that Tuesday’s motion was for “merely developing a plan to communicate what is going to happen in three months unless we change course.”

“If there is an earnest desire to truly address the emergency protections, then let’s do that,” she said.

Landlords and apartment owners have decried how long the protections have prevented some evictions and allowed tenants in rent-controlled units to live without rent increases.

Dan Yukelson, chief executive of the Apartment Assn. of Los Angeles, said small property owners have been shouldering an economic burden during the pandemic that should have been taken care of by the government.

“Hopefully many owners now hanging on by the skin of their teeth will have a chance to survive and avoid foreclosure,” he said. “Unfortunately for far too many it is far too late. I have spoken to too many owners who have been compelled to sell their properties at discounts or while in foreclosure, and with their loss, the county will lose a very important asset, which is that of naturally occurring affordable housing.”

The city of Los Angeles is also considering lifting many of its protections against evictions and rent increases under a proposal released by the city housing department last month. The plan would allow landlords to raise rent for rent-controlled apartments, accounting for about 75% of the city’s stock, beginning in 2024.

Larry Gross, executive director of the Coalition for Economic Survival, called the lifting of renter protections an “outrageous and insensitive action.”

“What the city and county is providing is a New Year’s present for renters that they clearly don’t want,” he said.

The move will “open the floodgates” for evictions, he said, adding that many tenants will end up homeless or forced to move.

“It’s really shortsighted and doesn’t really address our affordable housing crisis and will add to the numbers of people who are going to be forced out on the street,” Gross said. “They were just all patting themselves on the back about how the homeless numbers have risen but haven’t risen as high as in the past. This is going to mean our homeless numbers will burst at the seams.”

Biden says it’s ‘much too early’ to make decision about running again, opening door to chance he might not seek reelection

West Hollywood penthouse sells for $21.5 million, the highest price for a condo this year

He Wanted His Own ‘Little Piece’ of Los Angeles. Which Option Did He Choose?

Android Owners, Watch Out for These 7 Shady VPN Apps